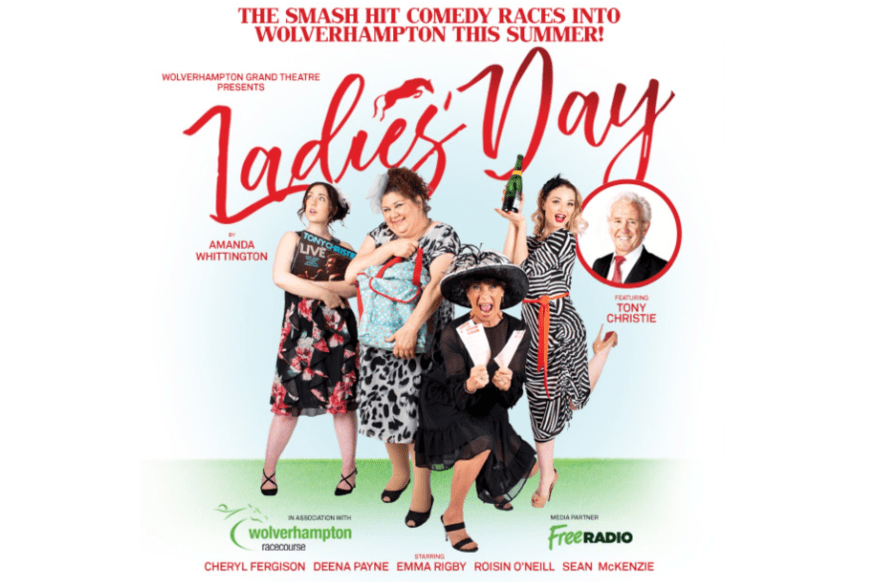 It was only last year when the Grand Theatre started once more to produce their own production. This year it’s the turn of Ladies’ Day but it’s not quite as you know it. The Grand has got Amanda Whittington on-board to revisit the whole production and move it from the plays original setting of York, down the motorway to Wolverhampton Racecourse, making it a truly local production for local people.

Whittington has reworded settings and admits in the programme that although the production was written only 13 years ago considerations like the #MeToo campaign has influenced her when writing the updated version.

The staging by John Brooking is plain but effective with minimal props and set. It was noticeable, with such small set changes the timings in the first act could have been improved but overall it was a fairly slick production and in the second act in particular in improved heavily.

Tony Christie’s music takes a central role in not only bringing a bit of energy and interest to the scene changes but also creates a soundtrack to the production. With Cristie based only down the road, The Grand lept at the chance to have the man himself to perform live which the audience certainly appreciate.

While the ensemble are members of the local community, a professional cast of six lead. Deena Payne brings a calm and poignant Perl keeping the group of five workers together while also wrestling her inner wants and desires.

Emma Rigby plays Shelly a character that is a fairly outgoing character but Rigby works this well with a more exposed and vulnerable side of a woman who just wants to make something of her life. A woman that perhaps wants to go on Love Island, not for the fortune, but for the doors that would open for her.

Róisín O’Neill makes a charming portrayal of Linda. There is a sense of inexperience and naivety especially at the start of the second act. O’Neill does well to progress this to the bold and brave character she becomes by the end.

Cheryl Fergison’s larger than life Jan is not only hilarious but also very lovable. She steals most of the laughs in the second but more importantly at the same time as appearing drunk she ensures that it doesn’t take away from the emotional and sad sou, that Jan is.

Sean Mckenzie plays the prominent male roles in the show. From the slimy reporter who makes your skill crawl. The moments between McKenzie and Rigby exemplify how to tackle such a sensitive moment in a very tactful way.

Similar to some horse races, the show starts of a bit slow but as soon as it’s over the first hurdle we’re on go a winner. Once the laughs start there’s no holding back and when the characters loosen up and expose their inner secrets that’s when the emotional intensity of the play kicks in. It’s clear that by asking Whittington to relocate the setting, the Grand wanted to stage a production that is fun, entertaining and also engaging. The decision to change the setting was certainly or gimmick. It works well.The story of five girls, experiencing a day like no other, is one that is sure to resonate with the local audience. The re-write, alongside a strong cast that embodies their characters, it creates a quality, fun night out at the races.

*Decision based on a ticket price of £24.50. For more info on this new value for money rating please visit here: Introducing a new kind of rating