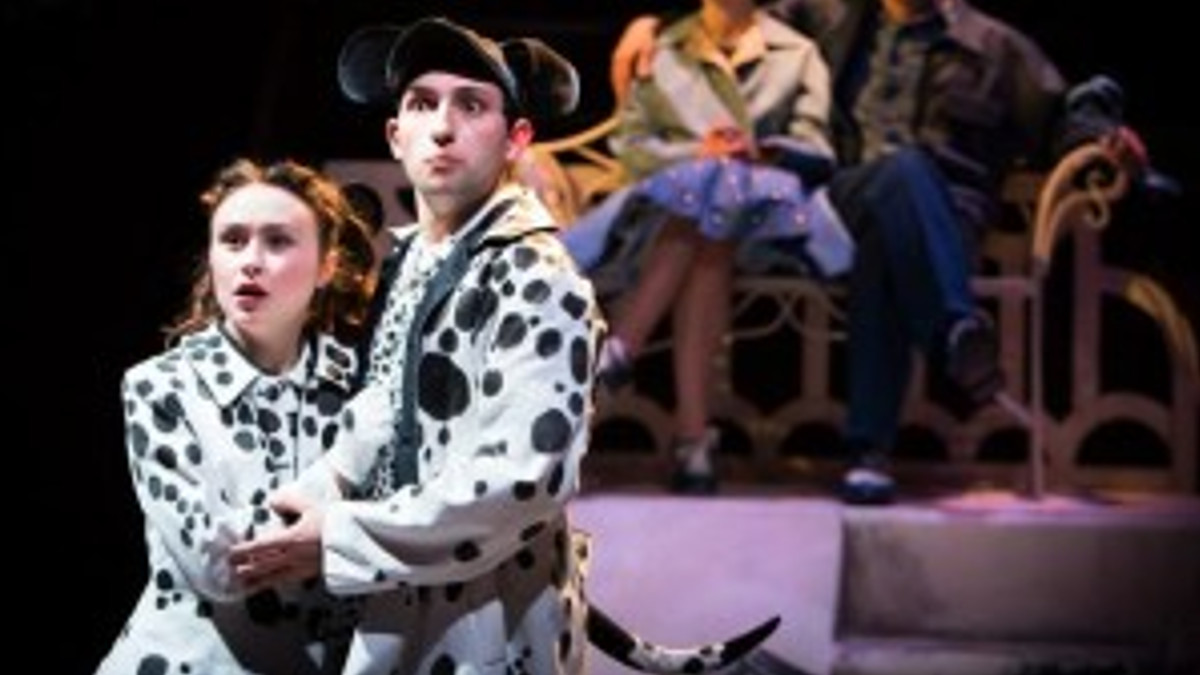 This review was originally written for the Reviews Hub

This new adaptation by Theresa Heskins uses fun, laughter and a good dose of emotion to entice the audience throughout. There may even be a few moments where you find a tear in your eye. Combining the story with James Atherone’s catchy songs and an almost film-like score to this delightful show has that extra bit of sparkle, along with some very enthusiastic and active lindy hop dance numbers.

Rodger and his dog Pongo meet Daisy and her dog Perdita, both couples instantly fall in love. However, things get rather tricky when Daisy’s old school friend Cruella, a lover of fur grows very fond of the spots that the Dearly’s Dalmatians possess and will do anything to get her grubby paws on them! However Pongo and Perdita don’t give up without a fight, they use dogs across the country to track their puppies down. But will they get there in time? Will Cruella manage to turn the puppies into next season’s catwalk?

Set in the 1950s this play uses the complex space of theatre in the round to its best, with a wide array of levels along with using the whole space. There is not an area of the auditorium where you won’t be very close the action. The lucky audience members of the front row get to be part of the set by sitting on what is disguised to be Mr and Mrs Dearly’s rather large sitting room sofa.

Costumes effectively and efficiently help the actors seamlessly move from the rôle of animals, humans and even choral members and furniture to share this lovely story with the audience. The costume to portray animals is a particular note– there are no over the top costumes here. Much rather clever use of traditional human costume brings out the anthropomorphic vision with aplomb.

Pongo and Perdita, Oliver Mawdsley and Hannah Edwards respectively, carry this production and make it extra special, their animal-come-human characteristics are not only realistic but have you engrossed. If you had your eyes closed you would be forgiven for thinking you were surrounded by excited Dalmatians. A special mention also has to be given to Polly Lister who plays the devilish Cruella De Vil who adds her own friendly yet conniving persona to this well-known villain. A shout out also, to the adorable young company who didn’t put a paw out of place.

The stage effects that are part of this production are second to none, a car you would want to take home, and what is arguably 101 ways to create the 101 Dalmatians. All of this and more add to this large-scale, family production that will have you pawing for more. Get yourselves down to the New Vic and join in the adventure, before they all get away.

The original review can be found here