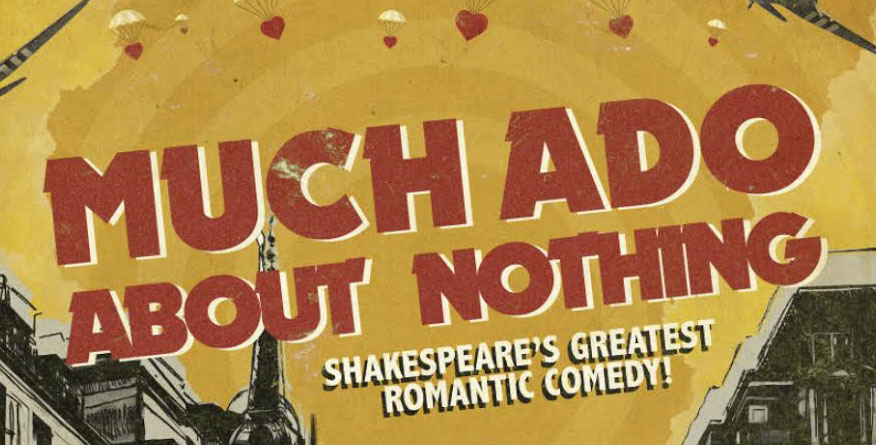 Much Ado About Nothing remains a perfect introduction to Shakespeare with its lighthearted script and easy to follow narrative. With a setting of a tranquil town the close of World War Two, this buoyant adaptation of Shakespeare’s classic romantic comedy is a fine piece of accessible theatre.

Conrad Nelson carefully crafts the piece to fit right into the British countryside, bringing light humour and slapstick humour to many situations while also exploring the darker elements of the play.  Trial by public opinion is something that is discussed far more today with social media and the british press and there is something rather clever with how Nelson reflects this in a different sort of setting. Not only that, but its rather poignant that the word of two soldiers Claudio and Benedict also plays with the concept of why these two men in a position power lead are given a voice, whole young hero can all but sob at the accusations.

Sarah Kameela Impey plays Hero in a sincerely sweet way, her naivety and youth shine through which makes her father Leonato more threatening when she is falsely accused. Simeon Truby plays the character with a huge sense of joy throughout but this contrasts to a far more tempered man as soon as the reputation of this family comes under questioning in full public view.

The Characters of Beatrice and Benedict bring a lot of the humour in the piece, the famous two constantly bickering middle-aged adults who hide their love for each other behind their sass and wit.  Isobel Middleton and Robin Simpson play the feuding couple.  Middleton is a natural with delivering the lively one-liners while also being able to show a woman who knows her own mind. Simpson may start by creating a stern exterior but soon his softer side develops and you can see the chemistry change between the two characters.

Nelson ensures it’s not just the striking quit wit of the script that makes you giggle throughout, there are plenty of rather raucous moments.  The scenes in the orchid are perfectly executed and bring the house down with laughter. The Night Guard also reflect the setting of the play with echos Dad’s Army and tastefully move the tone of the play back to comedy once the storm of Heros downfall passes.

Conrad Nelson’s swansong to Nothern Broadsides is a marching success. The setting is the perfect match for this Shakespearean classic and this new exploration of the piece means there’s plenty of new discoveries within the themes of the play. The comedy will shine through and delight all members of the family and this, twinned with the music makes a cheery, optimistic post war take on Shakespeare’s popular romantic comedy which is sure to be accessible for everyone.

*Decision based on a ticket price of £15. For more info on this value for money rating please visit here: Introducing a new kind of rating